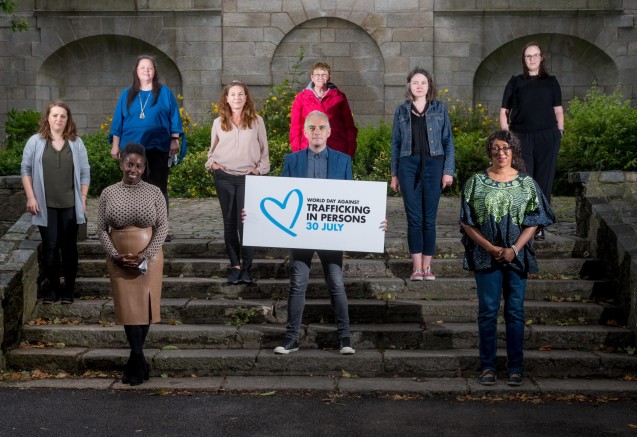 APT/AMRI collaborate with colleagues from MECPATHS, The Immigrant Council of Ireland, The Migrants Rights Centre Ireland, Ruhama, Maynooth University, Akidwa, and The International Organisation for Migration (photographed above) to mark the World Day Against Trafficking in Persons, 30 July.

The World Day against Trafficking in Persons was proclaimed by the United Nations General Assembly, in its resolution A/RES/68/192.  Such International days and weeks are occasions to educate the public on issues of concern, to mobilize political will and resources to address global problems, and to celebrate and reinforce the achievements of humanity. The UN has embraced them as a powerful advocacy tool

Each year has seen specific themes identified, with this year’s theme being ‘’Victims’ Voices Lead the Way.’’

This year’s theme puts victims of human trafficking at the centre of the 30 July World Day against Trafficking in Persons campaign and will highlight the importance of listening to and learning from survivors of human trafficking. The campaign portrays survivors as key actors in the fight against human trafficking and focuses on the crucial role they play in establishing effective measures to prevent this crime, identify and rescue victims and support them on their road to rehabilitation.

Many victims of human trafficking have experienced ignorance or misunderstanding in their attempts to get help. They have had traumatic post-rescue experiences during identification interviews and legal proceedings. Some have faced revictimization and punishment for crimes they were forced to commit by their traffickers. Others have been subjected to stigmatization or received inadequate support.

Learning from victims’ experiences and turning their suggestions into concrete actions will lead to a more victim-centred and effective approach in combating human trafficking.

The Anti-Trafficking Community in Ireland continues to raise awareness and their concerns about the placement of Ireland on a Tier 2 Watch-list by The US State Department which categorises Ireland as ‘the worst country in Western Europe’ in relation to Anti Human Trafficking responsiveness.