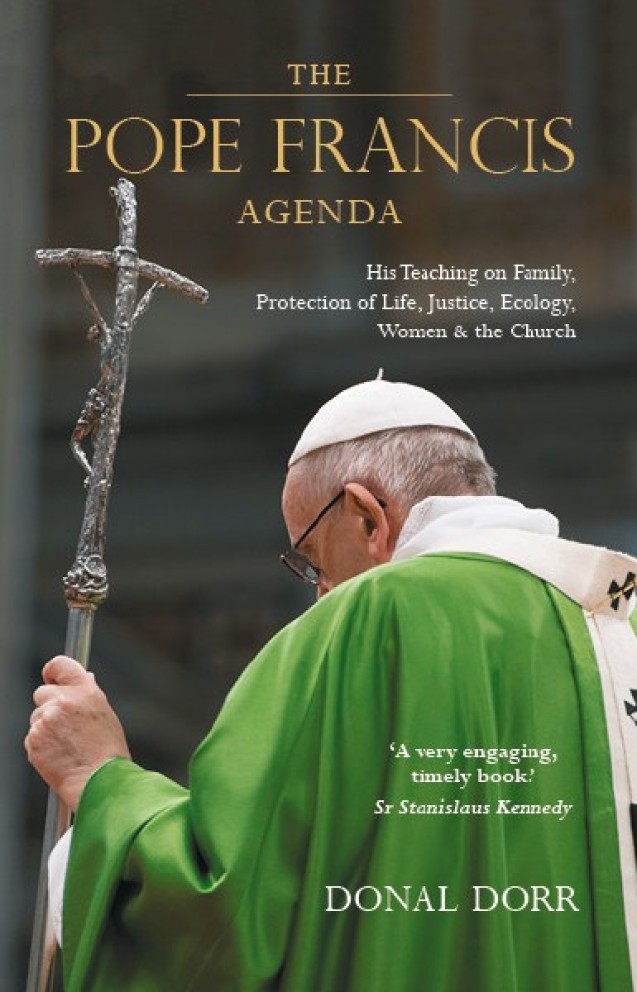 ABOUT THE BOOK
For the past five years, Pope Francis has inspired Christians and non-Christians alike with his heartfelt support for the poor and disadvantaged, as well as with his concern for the well-being of the earth. In The Pope Francis Agenda, Donal Dorr gives a comprehensive account of the teaching of Francis, drawing not only on the pope’s major documents but on his hundreds of public addresses and messages.
Topics covered include Francis’ views on the defence of human life and of the family; the role of women in the Church; migration and trafficking; his condemnation of nuclear weapons; his insistence that simple everyday language should be used in translating the liturgy; his radical criticism of the present unjust structures of our world; and the crucial need to repair our damaged relationship with our planet.

TESTIMONIALS
‘For Fr. Dorr, something radically new is taking place in our Church, right before our eyes. If Vatican II opened the windows of the Vatican to let the air in, Pope Francis is tearing down its walls to allow the Church to move out and confront the suffering, exclusion and marginalisation of so many and the unjust economic and political structures of our world. Pope Francis welcomes being challenged and Donal Dorr takes him at his word; he has not hesitated to be critical of Pope Francis’ response to issues such as child abuse and justice for women in the Church. This book presents Pope Francis as a man of deep faith and prayer, and a prophet for our time, both inspiring and challenging in equal measure. I cannot recommend this book too highly.’
Fr Peter McVerry, founder of The Peter McVerry Trust

‘This is a very engaging, timely book, calling us to read the changing signs of our time in the light of the Gospel so that the world may be transformed. Because the challenges faced today are urgent, the author believes this transformation has to come, not from the periphery, but from the top down and that this must be led by Pope Francis, just as Pope John XXIII led in Vatican II. He also points out that Pope Francis has already begun by proclaiming the Gospel in a new way and has already taken a radical stance on two of the most crucial issues in our world today, with his uncompromising option for the poor and for the earth.’
Sr Stanislaus Kennedy, founder of Focus Ireland

One of the many riches of this book is its direct engagement with the words of Francis. In a very accessible manner Dorr brings us the key concerns of Francis’ pontificate, issues such as family, justice, ecology, and women. The interplay between change and development is the question at the heart of Dorr’s writing. Is Francis introducing radical change, discontinuity to Church life, or developing teaching? We need to read this book to be able to better address this important question.
Fáinche Ryan, Director of the Loyola Institute, Trinity College Dublin.