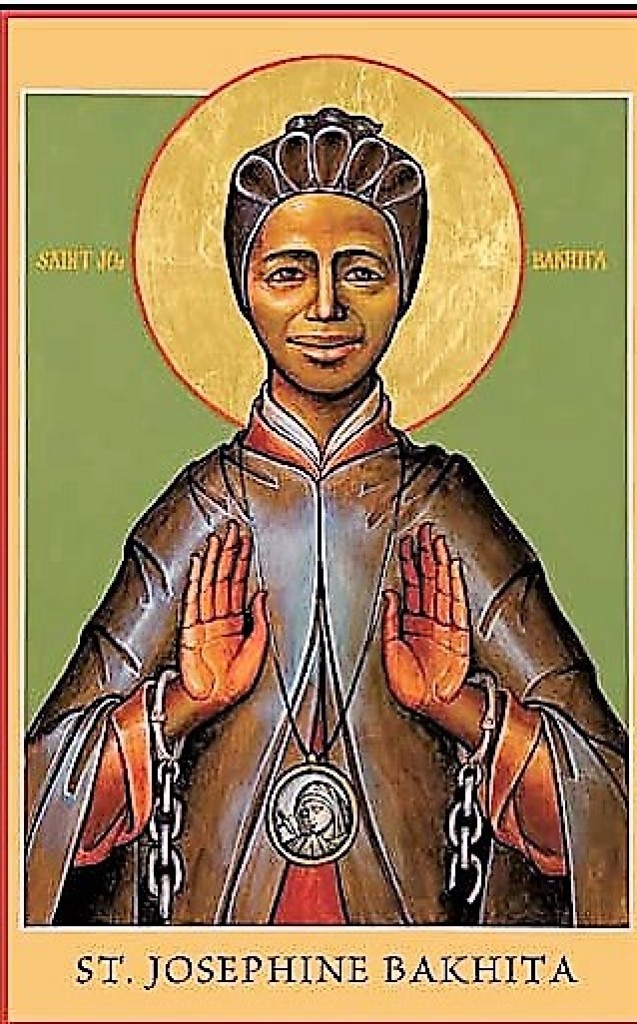 8 February, International Day of Prayer and Awareness against Human Trafficking.

Prayer Vigil from Talitha Kum linked at the end.

Born in Darfur, (Sudan), in 1869, Josephine Margaret Bakhita, according to local archives, was the niece of the Chief of the village and her family enjoyed a normal, happy childhood filled with love and care. But Darfur in the 1800’s, was a stomping ground for armed slave raiders, who regularly kidnapped men, women and children for sale in the slave markets of the day.

As a nine year old child, Bakhita was abducted by slave-raiders, a violence which Bakhita later recorded in her Biography, saying:

I was approximately nine years old when one morning I was walking around the fields, a bit far away from home, with a companion.

Suddenly we saw two strangers appear from behind a fence. One of them told my companion: ‘’Let the small girls go into the forest for  me to pick me some fruits. Meanwhile, you continue on your walk, we’ll catch up with you soon.’’ His objective was to fool my friend so that she wouldn’t raise the alarm while they were capturing  me.

I of course did not suspect anything and hurried to obey, which my mother had me accustomed to do. Once we were in the forest, I saw two persons behind me. One of them briskly grabbed me with one hand while the other one pulled out a knife from his belt and held it to my side. He told me ‘’If you cry, you’ll die! Follow us!’’

Bakhita was so traumatised by the experience that she was unable to remember her name. The abductors reportedly chose the name for her, ‘Bakhita’, (meaning ‘fortunate one’).  Sadly, for the remainder of her teenage years good fortune was not to be her way. Bakhita was sold from slave-trader to slave trader, enduring horrific punishments, torture and scarrings.

Her fifth and last buyer was the Italian Consul and trader Calixto Leganini who fled to Italy with his wife and slaves, thereby opening the possibilities for Bakhita to secure her freedom.