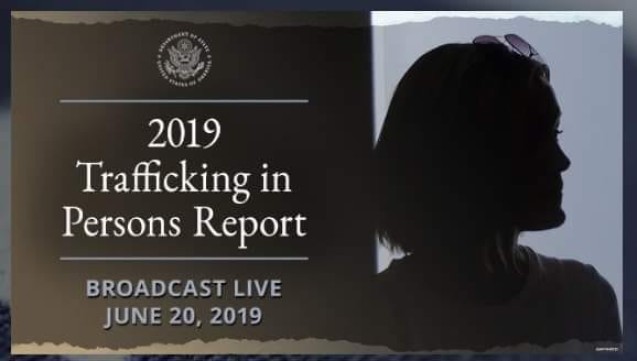 Ireland remains downgraded to Tier 2 in the TIP report 2019.

A call for positive and greater action as the US State Department’s Trafficking in Persons (TIP) Report continues to place Ireland at Tier 2, as the 2019 edition was launched yesterday, 20 June 2019, coinciding with World Refugee Day.
The report criticises Ireland’s ‘insufficient efforts’ to tackle Human Trafficking and noted Ireland’s use of direct provision centres to accommodate ‘traumatised victims,’ which lack specialised services for all victims ‘…but especially for female victims who had been traumatised due to psychological, physical or sexual violence.’
The report criticises the government,  in not meeting minimum standards in several key areas, stating the authorities ‘…had chronic deficiencies in victim identification, referral and assistance.’
Because of the fact that in Ireland if people have an asylum proceeding pending, they cannot be identified as victims of trafficking until the asylum process is complete, there is most likely to be under-identification of victims of human trafficking.
The report helpfully recommends training law enforcement on developing cases with evidence to corroborate victim testimony in addition to the training of judiciary and prosecutors on a victim-centred approach.

The familiar catchphrase comes to mind ” a lot done but MUCH MORE TO DO.”