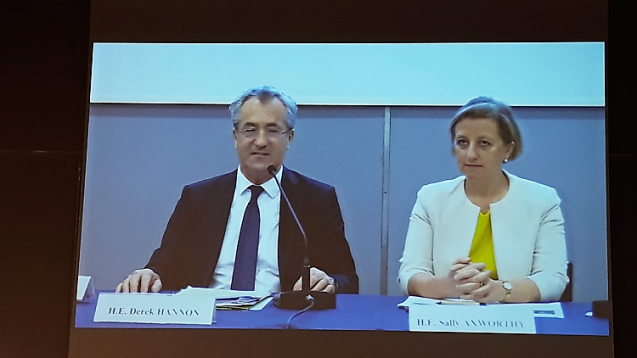 Report from APT member Fr. Paul Walsh, sm, having attended event in Rome organised by the UISG to mark the International Day for the Abolition of Slavery.

(sponsored by the UK and Irish Embassies to the Holy See and Talitha Kum) -UISG, Rome, 3rd December 2018

The session was wonderfully organised and very well led from beginning to end. We started on time, and finished on time. It was extraordinary that so much was included in 90 minutes. There was no sense of being rushed. The hall was about 2/3rd full – I guess about 70-80 people. There seemed to be quite a mix of Ambassadors from various countries (I identified those from Nigeria, South Africa, Hungary, Burkina Faso, Ireland, UK – there were many more), Religious, male and female, various people working for UISG. The Vatican Dicastery (Integral Human Development – Migrants and Refugees section) was well represented. It seems there were also some journalists present.

Sr Sally Hodgdon (UISG vice-president) opened the discussion, underlining the centrality of the issue of human trafficking for the UISG. She also emphasised the fundamental importance of collaboration at all levels to combat it. The fact that this event was a joint initiative on the part of the Catholic Women’s Religious worldwide agency against human trafficking, together with the embassies of the UK and Ireland was seen as an excellent example and model for such collaboration. The same emphasis on collaboration was referred to several times in the course of the presentations, but also the interventions from the floor – more than one Ambassador urging those working on the ground to keep in close collaborative contact with the governments in the various countries.

Dr Flaminia Vola (Regional Coordinator for Western Europe – Migrants & Refugees Section – Integral Human Development) expanded on the pastoral principles elaborated and proposed by the Holy See in the fight against Human Trafficking world-wide. This evoked a question from the UK Ambassador – ‘the principles are great, but how do we apply them?’ It seemed to me that the answer to this question remained only partial and implicit in what followed. Perhaps this is one of the big challenges facing the Church in this area.

Sr Gabriella Bottani (International coordinator, Talitha Kum) presented a very rich and inspiring account of what the Religious were doing to combat human trafficking in the countries in Africa. She presented Talitha Kum as a “network of networks” and showed how the locally-based groups were crossing frontiers and linking up with those working in adjoining countries. The focus is was on working together and on the ministry of being with, listening to, offering accompaniment and friendship to the victims. But gradually, more complete responses are being elaborated in many countries.

The two Ambassadors then presented the position of the governments and the police in both the UK and Ireland. H.E. Ambassador Sally Axworthy (UK) gave a particularly full presentation of the situation in the UK, and how the question of human trafficking had become a central concern of government since the tragic deaths of 21 (trafficked) Chinese worker who had drowned in an incoming tide. Both ambassadors stressed the importance of cooperation with the voluntary sector, and, especially, with faith-based organisations such as Talitha Kum.

I spoke to Derek Hannon, Irish Ambassador, afterwards about APT. I told him about the Gift Box initiative and also the visiting of schools and support for various campaigns to highlight the issue and to support legislative change.

That’s about it. I was delighted I went.   Paul Walsh, SM.