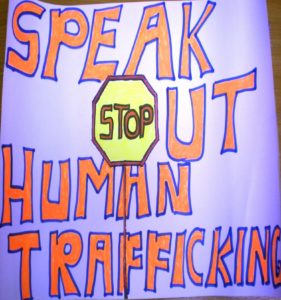 The Purpose of APT is twofold:

To achieve this purpose, APT does the following:

We have a wide network of international contacts through colleagues working in countries from which trafficked people originate. As well as addressing the evil of human trafficking, we use our network to help victims and to work on prevention.

At European level, we are in close contact with members of ‘Renate’ (Religious in Europe against Trafficking and Exploitation), who work in some 20 countries of Europe. We are also linked with COATNET – the ecumenical network of Christian organisations against trafficking, and with ‘Talitha Kum’, the Rome-based group that co-ordinates the work of religious communities worldwide who are trying to do something concrete about this problem.

At national level in Ireland, we have a representative on the High Level AntiTrafficking Working Group in Ireland’s Ministry of Justice. We also work with other groups who are concerned about this issue.

APT is a faith-based group working against Trafficking in Persons (TIP). The members of APT are people belonging to religious congregations or missionary societies which are part of AMRI (the Association of Leaders of Missionaries and Religious of Ireland). APT welcomes collaborators and resource people who are willing to share its work on a short-term or long-term basis.

APT members first met in December 2005. Concerned about the growing reality of the worldwide trafficking of women and children for sexual exploitation, we wanted to explore ways of working together to prevent this evil.

For further information email us: info@aptireland.org