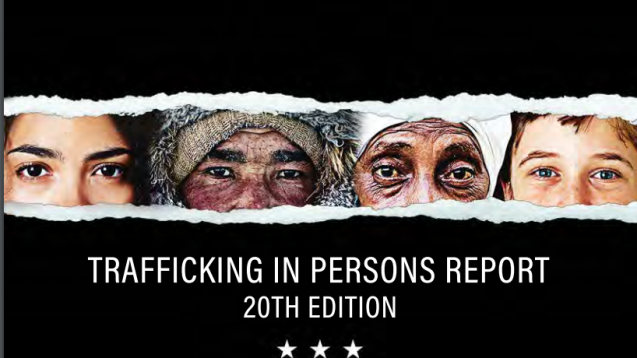 Ireland is downgraded to Tier 2 Watch List, as report identifies serious and widespread issues with the identification and treatment of HT victims in Ireland. .

Secretary of State, Mike Pompeo and US Presidential Advisor Ivanka Trump released the 20th Annual Trafficking in Persons Report, in the historic Treaty Room at the US Department of State.

Secretary Pompeo referred to the human story of a child named Ted, who was sexually exploited for years by his step-father, to illustrate that human trafficking – and that includes forced labour and sex trafficking – happens all around us.

With 25 million adults and children suffering from labour and sex trafficking worldwide, Secretary Pompeo encouraged governments worldwide to take bold action to collaborate and work to end this crime against humanity, stating ‘’That desecration of the inherent value and immeasurable worth of human beings, each of us created in the image of God, makes human trafficking a truly wicked act.’’

This year is a milestone in that it marks the end of two decades of reinforcing the work to combat Human Trafficking. In the report, we read that 22 countries were upgraded this year, 13 of them from Sub-Saharan Africa. Namibia received a Tier 1 rating – the best possible. It is the first and only African country to do so since 2012.  Singapore is the report’s other newly ranked Tier 1 country. Bolivia was singled out for their progress to increase convictions and identify victims, among other significant improvements.

Ireland is downgraded to Tier 2 Watch List, alongside Romania and Saudia Arabia. Ireland held Tier 1 status during the period 2013 through to 2017, but our ranking has continued to decline over the past three years. The report acknowledges the Irish government’s efforts to increase prosecutions, funding to NGOs for victim assistance and increased provision of anti-human trafficking training for gardai and immigration officers. The report does go on to state that the government had not shown ”overall increasing efforts” compared to 2018 and no trafficking convictions had been secured since the introduction of legislation (2013) criminalising sex trafficking and labour trafficking

With reference to Ireland, the report further states that a failure to secure a trafficking conviction ” weakened deterrence, contributed to impunity for traffickers and undermined efforts to support victims to testify.”

The lack of specialised accommodation and lack of adequate services for victims and said changes to the working scheme for fishermen had ”increased their vulnerability to human trafficking and exploitation.”

Unfortunately, the report also calls out a group of nations whose state-sponsored pattern of forced labour have designated them in the Tier 3 category. Among them are China, where the Chinese Communist Party and its state-owned enterprises often force citizens to work in horrendous conditions on Belt and Road projects.

Then there’s Cuba. Up to 50,000 Cuban doctors have been forced by the Castro regime into human trafficking situations in more than 60 countries around the globe. They are the regime’s number one source of income. And in Central Asia, some governments have a long-standing history of compelling people to work in the cotton industry and other sectors.

The launch ended with the statement of commitment of the United States to ‘’…free all those who are still enslaved, help restore the lives of those who have been freed and punish their tormentors.’’

Survivor leadership in the anti-trafficking movement is a priority of the United States Government. Of the 10 TIP Heroes recognised at this year’s launch, Ms Sophie Otiende has been awarded the 2020 TIP Hero award, specifically for her survivor leadership capacities. In  this regard, Ms. Otiende exemplified her leadership role in the development of victim assistance infrastructure, resources, and practices in Kenya to ensure human trafficking survivors receive the best possible care and her unwavering efforts to raise awareness of human trafficking in local communities.